This quarterly report has been prepared by management as required by Section 65.1 of the Financial Administration Act and in the form and manner prescribed by the Treasury Board. This quarterly report should be read in conjunction with the Main Estimates, Supplementary Estimates, previous Quarterly Financial Reports for 2012-13, as well as Canada's Economic Action Plan 2012 (Budget 2012).

This quarterly report has been prepared by management using an expenditure basis of accounting. The accompanying Statement of Authorities includes the Infrastructure Canada spending authorities granted by Parliament and those used by Infrastructure Canada consistent with the Main Estimates for the 2012-13 fiscal year (FY). This quarterly report has been prepared using a special purpose financial reporting framework designed to meet financial information needs with respect to the use of spending authorities.

The authority of Parliament is required before moneys can be spent by the government. Approvals are given in the form of annually approved limits through Appropriation Acts or through legislation in the form of statutory spending authority for specific purposes.

Infrastructure Canada uses the full accrual method of accounting to prepare and present its annual departmental financial statements that are part of the departmental performance reporting process. However, the spending authorities voted by Parliament remain on an expenditure basis.

It should be noted that this quarterly report has not been subject to an external audit or review.

In FY 2012-13 Infrastructure Canada is working with provinces, territories, the Federation of Canadian Municipalities, and other stakeholders to advance a future long-term plan for public infrastructure that extends beyond the expiry of the Building Canada Plan.  During FY 2011-12, management transitioned from a focus on delivering the Economic Action Plan (EAP) to a focus on core longer-term programming including the permanent Gas Tax Fund and the Building Canada Plan.

Figure 1: Expenditures Compared to Annual Authorities (as at December 31st, 2012) 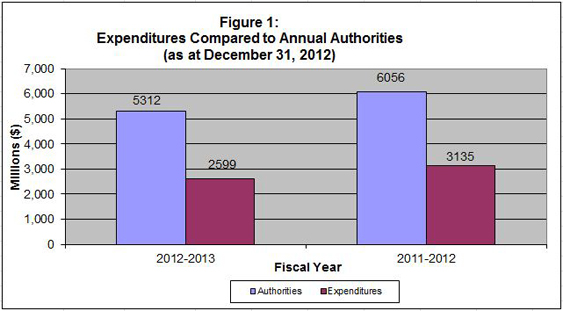 Significant Changes on the Statement of Authorities table

This decrease can be partly attributed to the completion of programs under the EAP including:

The year-to-year variance in use of the Department's Contributions Authorities Available for Use is also due to the following variances:

Year-to-Date Expenditures under the Green Infrastructure Fund (GIF) totaled $4.9M in FY 2012-13 and these expenditures are reflected in the Department's Contributions Authorities and in the Department's Statutory Authority for GIF. This represents 3.1% of the Total Authorities Available for GIF ($156M). As of Q3 in FY 2011-12, the Year-to-Date Expenditures under this program were $9.5M. As with all major infrastructure projects, projects funded under the GIF take time to plan, design and implement. The payment of federal contributions under the program is made based on claims submitted by project recipients in respect of costs once they have actually been incurred. As a result, expenditures under the program relate to the pace of actual project development and construction and responds to the cash-flow requirements of individual recipients in respect of their projects.

The Department's Use of Operating Authorities as at Q3 has also decreased in the current FY (57.8% used/$31.1M), compared to the same point in the prior FY (63.3% used/$39M). This decrease is mainly due to cost-saving measures implemented in the department as well as a reduction in expenditures related to SSC which is now incurring expenses that Infrastructure Canada incurred in the prior FY. These decreases are described further in the following section.

There are significant variances between several of the FY 2011-12 and FY 2012-13 Planned Expenditures by Standard Object. Planned Expenditures by Standard Object for FY 2012-13 were based on historical spending. In the future, these will be adjusted to consider spending trends and to remove anomalies or changes in program costs.

When comparing the amounts expended as at Q3 in FY 2012-13 to Q3 in FY 2011-12, there are significant variances in the following standard objects:

The decrease of $528M in Transfer payments is described in the Significant Changes on the Statement of Authorities table section of this report.

Most of the decreases in amounts expended by standard object relate to cost-saving measures implemented by the Department and to the creation of SSC.

The creation of SSC also had an impact on the amounts expended on Professional and special services (reduction of $309K), Transportation and communication (reduction of $51K), and Acquisition of machinery and equipment (reduction of $212K). SSC now incurs telecommunications costs and other IT costs on behalf of Infrastructure Canada, which affected these standard objects.

In Budget 2010 - Leading the Way on Jobs and Growth, the Minister of Finance announced that the operating budgets of departments, as appropriated by Parliament, would be frozen at their 2010-11 levels for the years 2011-12 and 2012-13. Infrastructure Canada has no ongoing base level of funding for administration and operating costs. Its operating requirements have always been funded entirely from infrastructure programs and related administrative costs are confirmed by Treasury Board on an annual basis. Without ongoing operating funding, it is challenging to predict how a budget freeze will affect Infrastructure Canada's operations.

While the Department works continuously with its partners to ensure that contribution forecasts are as accurate as possible, and to re-profile Infrastructure Canada's funding to meet the needs of its partners, there remains a risk that actual transfer payment expenses will be less than forecast, resulting in lapses of funds. It should be noted that while Infrastructure Canada's Total Authorities at Q3 were $5.3B, the Department is forecasting expenditures of $4.2B for FY 2012-13. Therefore, the Department is expecting to lapse approximately $1.1B, which it will seek to reprofile to future years to match the cash flow requirements of its partners. Funding lapses can occur for a number of reasons: for example, the Department's partners may encounter delays in getting their projects underway or built, or may be late in submitting claims to the federal government for work that has already been completed.

To respond to this risk, Infrastructure Canada has raised the issue with provincial/territorial ministers and deputy ministers, and the Department's federal delivery partners.  Particular emphasis is being placed on:

Despite these efforts, funding lapses under contribution programs will never be eliminated due to the complex nature of infrastructure projects. The realities of construction projects include challenges like the time it takes to plan and implement infrastructure projects, severe weather, and shortages or delays in the receipt of professional services or materials.

Significant Changes in Relation to Operations, Personnel and Programs

Louis Lévesque was appointed Deputy Minister of Transport, Infrastructure and Communities on November 12, 2012.

SSC is providing IT infrastructure services to the Department, in accordance with their mandate to streamline and reduce duplication in the government's IT services. A transfer of $4.3M of the Department's operating authorities was made to SSC through Supplementary Estimates 'B'.

Measures announced in Budget 2012 will be implemented to refocus government and programs; make it easier for Canadians and business to deal with their government; and, modernize and reduce the back office.

[1]Includes only Authorities available for use and granted by Parliament at quarter-end.

[2]Pursuant to section 31.1 of the Financial Administration Act and Order-in-Council P.C. 2011-1297 effective November 15, 2011, $1,600,155 is deemed to have been appropriated to Shared Services Canada Operating Expenditures' vote, which results in a reduction for the same amount in Infrastructure Canada, Vote 50, Appropriation Act No. 1 2011-2012.

To view the RTF version, use the document conversion features available in most word processing software, or use a file viewer capable of reading RTF.

[4]Pursuant to section 31.1 of the Financial Administration Act and Order-in-Council P.C. 2011-1297 effective November 15, 2011, $1,600,155 is deemed to have been appropriated to Shared Services Canada Operating Expenditures' vote, which results in a reduction for the same amount in Infrastructure Canada, Vote 50, Appropriation Act No. 1 2011-2012.

To view the RTF version, use the document conversion features available in most word processing software, or use a file viewer capable of reading RTF.